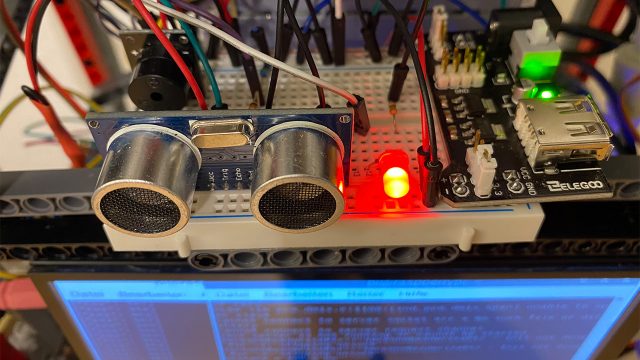 The world of programming has recently become much more accessible to younger students. It has become child’s play, so to speak, since the advent of new and open graphical programming interfaces such as Fraunhofer’s Open Roberta Lab, Microsoft’s MakeCode, MIT’s Scratch, or Apple’s Swift Playgrounds.

In this course, basic programming methods and ways of thinking are taught. But the realization of own programming projects should be in the foreground. The programming logic is initially easy to understand by moving and assembling graphical programming blocks. On laptops, tablets, or smartphones, along with sensor-packed Calliope or Raspberry Pi minicomputers or mini-copters, we create executable programs in the very first lessons.

With the help of instructions, linked to variables, branches and loops, applications are created that promise fun and action: mini piano, alarm systems, temperature measurements, automatic bicycle lighting, random generator, 1 × 1 mental arithmetic trainer, vocabulary trainer are just the first. Later – after an inserted soldering course – remote-controlled and autonomous robots, vehicles etc. can be built and put into action with the help of program-controlled servomotors via Bluetooth. For the mini-copter, maneuvers can be programmed and executed.

We also want to further develop our humanoid LEGO robot “NOVERO 4.0”, with which we took part in the “Jugend forscht” competition.

Mr. Trzaski teaches Catholic Religion on Nonnenwerth as well as the robotics module in the class of natural sciences in grades 8/9. He also looks after the IT equipment and the network of our school.